Following is a preliminary review based on a week of operation of the Wink Hub 2 home automation hub, by Flextronics. This device sports several impressive features and I wanted to get the information I have to date posted. I will continue to update and add to this review as I put this device through its paces, and attempt to work through a few of the noted issues.

Preliminary: Top pick for those who favor ease of use, reliability, and local control over device and integration flexibility

The idea of a smart home is as exciting to some as it is frustrating to others. While there are a multitude of central controllers out there from which to choose, the original Wink hub has consistently been on my short list of recommended hubs – particularly for those with less patience for instabilities and arcane setup procedures and who are willing to forgo support for the latest bleeding edge peripheral devices.

I must admit, before I even opened the box to this next generation Wink Hub 2, I had high hopes for the device. By most accounts, Flex had put together a solid offering with this product. The question I was hoping to answer with this review is whether or not the Wink Hub 2 could be the best choice for some – or even most user’s home automation and control needs.

And spoiler alert – the answer is a resounding maybe.

Along with many other home automation enthusiasts, I have been waiting to see how the American-based international electronics manufacturing giant Flex (formerly Flextronics) would approach the Wink product line. Flex acquired the Wink platform for $15 million in November 2015 from the invention incubation company Quirky, two months after Quirky filed for chapter 11. Arguably, at that acquisition price, Flex’s intention could have been to cut investment and focus solely on squeezing out profits from continued sales, while putting the Wink platform on a slow death march.

I was very pleased however in September when Flex unveiled the all-new Wink Hub 2. My primary reasons were twofold, and had little to do with the impressive technical features of the device itself:

Although the added features of the Wink Hub 2 are more evolutionary than revolutionary from an architecture perspective, the updates address what I consider to be Wink’s most glaring issues relating to its cloud-based dependency and Wi-Fi connectivity stability. With the Wink Hub 2, Flex steps up the original Wink’s game, by adding 5GHz and wired connectivity options, an improved and hopefully actually functionally practical BlueTooth LE radio, and most importantly, faster processing and more memory for increased speed and reliability for local control of schedules and automations.

The Wink Hub 2 two offers several improvements over its predecessor: 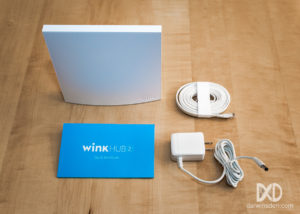 Flex boasts that the new Wink Hub 2 offers a slimmer look and more elegant finish that the original hub, and I do agree they have hit the mark here. Of the top rated home automation controllers I have reviewed to date, the Wink Hub is the first hub I would feel comfortable placing on a bookshelf in my living room. 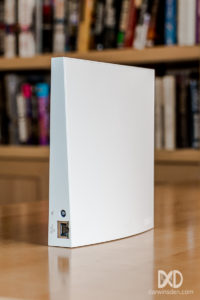 Initial set-up requires that you download the Wink mobile app via the Apple App Store or Google Play Store and connect your hub to your home network either directly via its ethernet port or via Wi-Fi. I was impressed with how easy it was to connect the hub to my Wi-fi network thanks to the hub’s auto-discovery feature, which eliminates the old-school and arduous manual task of first joining your mobile device to a local hub network before proceeding with Wi-Fi configuration.

For existing first generation Wink hub users, the Wink app can automatically transfer existing smart products, automations, and personal settings from the original device to the Wink Hub 2, in a matter of minutes. Since I did not have a current Wink setup, I was unable to test this capability, but initial user reports appear to indicate that this feature works well.  While this hub migration capability may sound like a trivial and necessary feature, it is something that SmartThings Hub users have been clamoring for for years now.

In addition to support of manual device actions via and Apple IOS or Android mobile device, Wink provides fairly simple and intuitive controls for more advanced groupings and automations through what they term as Robots, Schedules and Shortcuts:

In less than an hour of powering up my Wink Hub 2, I was able to add several of my existing wall switches, door/window sensors, flood sensors, and a Nest thermostat to the hub. The Wink mobile app is relatively intuitive, and I was able to quickly create Schedules to turn my certain lights on at sunset and off at sunrise, and also created a Robot to trigger turning on and off additional lamps based on the state of a room wall switch. Even more impressively, with just a few button presses using the Wink’s built-in capabilities, I was able to create a Robot to automatically turn on my front porch lights anytime my phone was detected entering my home’s geofence area between sunset and sunrise.

In just a matter of minutes, I also was able to enable the Wink Skill on my Amazon Echo Alexa app. The Alexa – Wink integration worked very well for me, and after telling Alexa to discover my newly added devices, I was able to control them by their assigned names, using simple English commands such as “Alexa, turn on front porch light”, “Alexa set entry light to 20%”, and “Alexa, set hallway temperature to 75”.

To test the local control capabilities of the Wink Hub 2, I disconnected my home network router from the internet by removing it from my cable modem. As promised, my connected light switches responded quickly and reliably when controlled by iPhone which was still connected wirelessly to my network. I also found that Robots/automations performed consistently and reliable without the internet connection.

After using the Wink Hub 2 now for about a week now, I am pleased with its intuitive and stable operation. When connected directly to my router using the included ethernet cable, my hub has been 100% reliable. My sunrise and sunset lighting rules and simple Robot/automations have executed flawlessly during the past week. 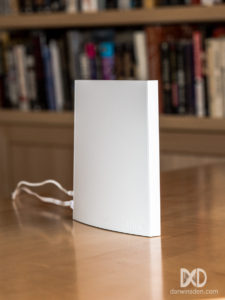 I’m still evaluating the Wink Hub and working through my system configuration, but after nearly a week of operation, following are my biggest issues encountered to date. I will continue to update and revise this list as I become more familiar with the platform and hopefully work through some of these concerns: 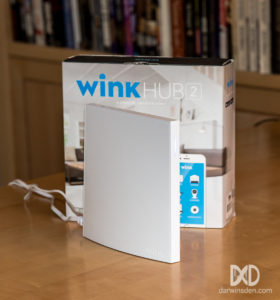 Although this is a preliminary assessment, and I will continue to update and add to this review as I put this device through its paces, I currently do recommend the Wink 2 Hub For those who favor ease of use, reliability, and local control over device and integration flexibility.

The Wink Hub 2 is a reasonably priced device supporting an impressive protocol collection of Z-Wave, ZigBee, Lutron ClearConnect, Bluetooth LE, and Kidde. The local control capabilities of the hub worked well for me and I am comforted to know that my schedules and automations will continue to operate even if my internet connection or the Wink cloud is unavailable.

If the cons below are of concern for you and you are willing to accept cloud control for manual interactions and some automations, I would recommend the SmartThings Hub (see the DarwinsDen.com SmartThings Hub review) over the Wink 2 Hub. For those concerned about security and performance issues with cloud-based home automation solutions, all of the controllers listed in the Home Automation Controller Comparison Table that are indicated as having Local Control capability, such as the Mi Casa Verde VeraPlus, Universal Devices ISY994i Z and HomeSeer Home Troller Zee S2 are very capable devices and worth evaluating for your home automation needs.