These new switches appear to be manufactured by Dragontech, but have custom HomeSeer firmware that provides double-tap, triple-tap, and hold functionality for both up and down presses, as well as instant status – all via Central Scene Notification. These new switches include the new 500 series Z-Wave Plus module sporting extended range and network-wide inclusion (NWI). 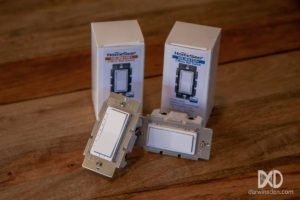 Interestingly, these HomeSeer WS100+ and WD100+ switches physically look and feel very similar to their GE 12722 and 12724 counterparts – including very similar casing and screw terminals. The WS100+ on/off switch also has the same (annoying for some) short delay as the 12722 before the physical relay responds after a press. The WD100+ dimmer performed similarly to the GE 12724 dimmer, with no flickering or noticeable hum when used with a dimmable LED bulb. 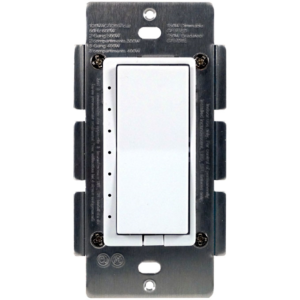 Aside from the added LED dim level indication on the WD100+, the main physical differences are that the HomeSeer switches have bluish-white and slightly brighter LED indicators, and the WS100+ on/off switch does not include an air gap switch as does the GE on/off switch.

The LED dim level indicator, instant-on, and double/triple press and hold functions worked well in my testing and are welcome additions to the GE capabilities, at an only slightly higher price-point. These are now my top recommended switches in the bang-for-the-buck category.

A simple use case for these switches might be to turn on your porch light with a single press, include pathway lighting with a double tap, and also include flood lighting with a triple tap.

If you like the GE switches, you’ll really like the HomeSeer switches. If you don’t care for the GE switch look & feel, or the ~400ms delay on the physical relay of the on/off switch, these may not be quite what you are looking for, and you may be more interested in the Cooper Aspire, Leviton, or other offerings in the Z-Wave In-Wall Switch Comparison Table.

Issues to be aware of

EDIT 15, June 2016: HomeSeer has implemented a firmware update for the HS-WS100+ on/off/on toggle issue described below. HomeSeer has also updated the HS-WD100+ dimmer firmware to enable control of the dim rate when controlled remotely. This update also enables a much slower ramp-up of the dim level when controlled remotely, which I believe will resolve issues some users have had using this dimmer with certain bulbs. If you have a HomeSeer controller or a hub that supports over the air updates, the updated firmware can be downloaded from HomeSeer here.

I initially had an issue with the HS-WS100+ On/Off switch where the switch would turn on as expected when manually pressed or held, but sometimes would then immediately turn off and finally back on again. I observed this behavior when testing with a SmartThings Hub, HomeSeer controller, and also an Almond+. The switch never exhibited this behavior when it was left un-paired to a controller. HomeSeer support quickly sent me out a replacement and so far, I have not seen this exact annoying behavior after a normal on press, although it does occasional toggle off and back on again when held on. I have seen other reports now of this behavior, and it appears that so far, HomeSeer support has been quick to respond with replacement switches.

I’ve written the following device handlers for the Samsung SmartThungs Hub that handle both double-tap, triple-tap, and hold notifications for both the up and down cases for these switches. They also handle a scene notification for normal press up and press down for “instant” on/off status notification.

Update 26-September-2016: The WD100+ device handler has been updated to support preference options for ramp rate configuration, switch reversal, as well as an option to turn the light on full brightness following a double-tap up action.

Update 14-January-2017: The WD100+ device handler has been updated to an option to set the dim level to 25% following a double-tap down action. Also, additional button results have been added for single press up (button 7)  and single press down (button 8) actions. These are useful for enabling smartApp rules to execute on single tap up/down actions regardless of whether the switch is already currently in the on or off state.

The device handlers also include virtual buttons on the mobile app for all the possible button states. 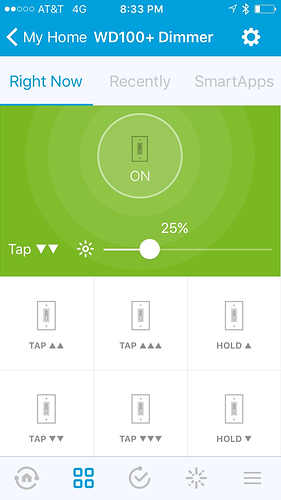 The HS-WS100+ and HS-WD100+ SmartThings Hub Device Handlers can be downloaded at:

If you don’t need all of the virtual double/triple tap and hold buttons on you mobile app and just don’t want all the clutter, SmartThings community developer erocm1231 also created a WD100+ device handler without all the fuss right around the same time I developed these. This handler uses the same button mappings as described above.

The ability to have multiple SmartThings device handlers available within a couple days after a product release is not uncommon, and is a testament to the SmartThings flexible architecture and the very supportive SmartThings community members.

A special thanks to SmartThings community member Dale Coffing for testing the dimmer device handler on Windows Phone and for providing this short video of the WD100+ device handler virtual button function on Android. 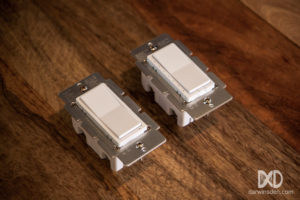 To execute actions within the SmartThings architecture based on these new capabilities, you’ll need to use a SmartApp – and there are several options available. If you are only interested in making use of double tap and triple tap functions, the stock SmartThings Smart Lighting and Button Controller SmartApps can be used to trigger actions based on the first 4 buttons configured in this device handler. If you would like to make use of all 6 functions, Dale Coffing has also put together a modified Button Controller SmartApp (more info here).

If you’re also looking for a universal Rule Engine capability (and are brave enough to try the Beta version), the new CoRE (the Community’s own Rule Engine, pioneered by intrepid developer Adrian Caramaliu) SmartApp, can also perform this function – as well as just about everything else. 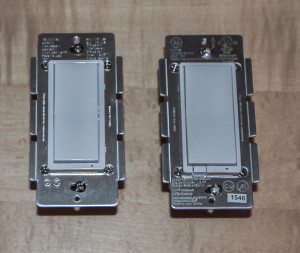 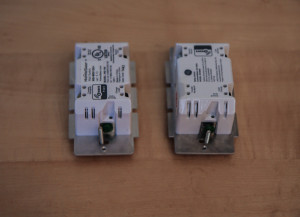