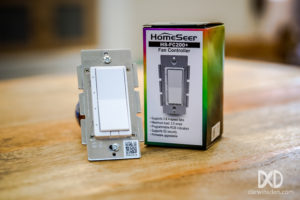 It’s arrived! This September (2018), HomeSeer introduced their new HS-FC200+ in-wall Z-Wave fan controller – and I finally got my hands on one. The HS-FC200+ supports multi-tap functionality as well as HomeSeer’s novel capability to control the on/off state and RGB capabilities of the LED indicators. Altogether, this makes the HS-FC200+ a nice complement to the HomeSeer Z-Wave in-wall HS-WD200+ dimmer and HS-WS200+ switch.

As I wrote in my review of the HomeSeer WD200+ dimmer and WS200+ switch, HomeSeer definitely gets it when it comes to smart switch innovation – and they continue to add to their great product line with the HS-FC200+. It still puzzles me why other companies are not pushing the envelope with in-wall devices considering the convenient location options and mains power access that are inherent to these devices.

Melding the RGB and multi-tap capabilities of their other product line offerings into a Z-Wave fan controller, the HS-FCS200+ is a welcome evolutionary upgrade.  With the release of this device, I feel quite comfortable continuing to recommend the HomeSeer switch line as my pick for the best smart wall switch/controller devices on the market today.

Even if you don’t make use of multi-tap and addressable LED capabilities that HS-FC200+ offers, this is a solid Z-Wave fan controller that also displays a visual indication of the current fan speed. For guests in your home, the 4 LED display also provides a nice differentiator from the plethora of other light switches that may be also on your wall, uniquely identifying that this device controls a multi-level appliance. 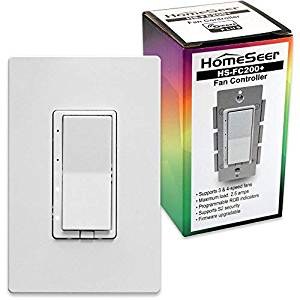 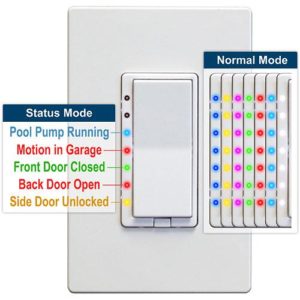 Multi-tap: Notifies the controlling hub via central scene notification when the switch has detected 2-5 taps or a held press in either the up or down direction. A simple use case for multi-tap capabilities might be to turn on your porch light with a single press, include pathway lighting with a double tap, and also include flood lighting with a triple tap.

Instant Status: Immediately notifies the Z-Wave controller via a Central Scene notification as well as Switch Multilevel Report (dimmer) or Binary Report (switch) when the switch has been turned on or off. This provides fast on/off change detection when using a compatible Z-Wave controller.

Normal mode: Standard/default operating mode. The LED indicators glow to indicate the fan level status. All LED’s are set to a single defined color that is controllable via a Z-Wave controller.

Status mode: Allows independent control of color and blink status of individual LED’s. This can be used to reflect the status of connected home automation sensors and devices. For example (from HomeSeer’s website): if it’s after midnight and the garage door was left open, the 3rd LED on all the bedroom dimmers can be programmed to glow yellow (or any color). If a smoke alarm goes off, all LEDs on all dimmers can blink red. If no status conditions are active, the wall switch can return to normal mode. When in status mode, the dimmer will temporarily revert to normal mode when the switch fan level is being manually adjusted, and will return to status mode immediately when the switch paddle is released.

The HS-FC200+ fan controller can be installed in 3-5-way circuit configurations using the HomeSeer HS-WA100+ wired 3-way companion switch. This is a non-RF companion switch and requires a conventional 3-way traveler wire. Once installed, HS-WA100+ works will remotely control the attached HomeSeer fan controller with on-off-speed functions as well as trigger the advanced multi-tap/hold capabilities.

While the HS-FCS200+ operates just fine using the HS-WD200+ dimmer device handler for Smartthings (see the DarwinsDen.com and SmartThings device handler review), the following device handler is specifically tailored for the hab controller device and adds:

Special thanks to Alex (@aruffell) for the initial port of the WD200+ device handler from my original baseline, and to @ChadCK for the code snippets for low, med, and high buttons.

For more information on the LED control capabilities of this device, HomeSeer has detailed out specific SmartThings instructions for their WD200+ dimmer (which in general also applies to this device) in a HomeSeer HelpDesk article. 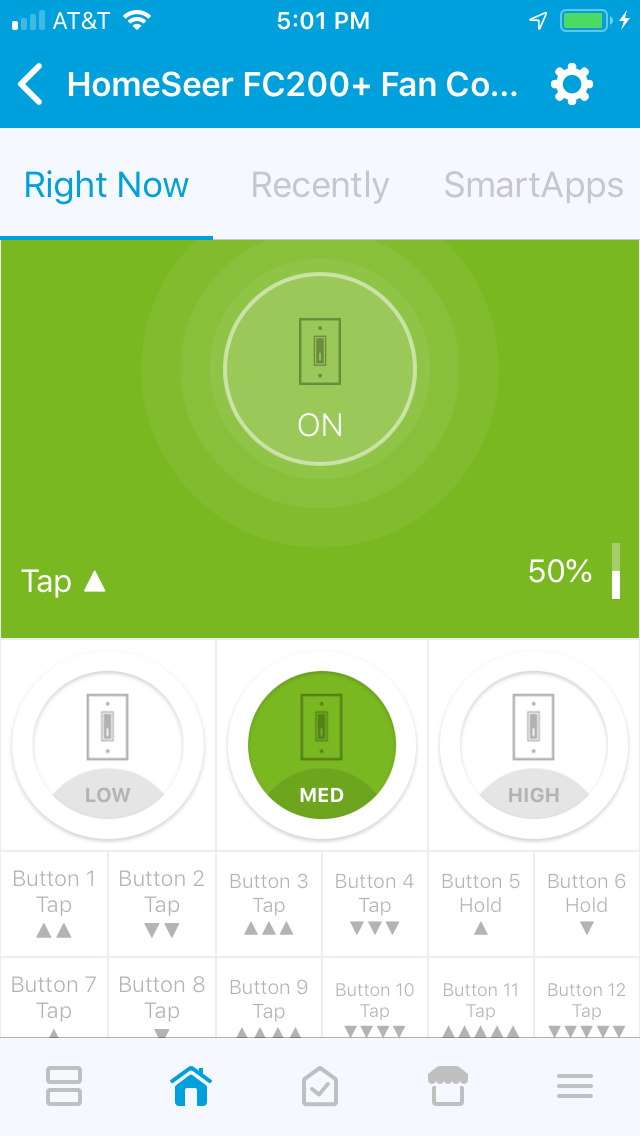 The HS-FC200+ SmartThings Hub Device Handlers can be downloaded at:

The button mappings for SmartThings can also be found in the mobile app GUI.

I highly recommend WebCoRE to control any SmartThings complex interactions such as controlling the LED color and/or blink state of these switches in status mode. For most simple interactions involving multi-tap actions, the standard Smart Lighting app may satisfy your needs.

Here is the sample WebCore script I usedfor the WD200+ dimmer to set flash all LED’s red when a door is open when in night mode: 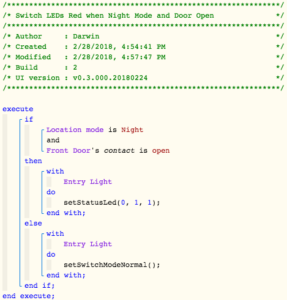 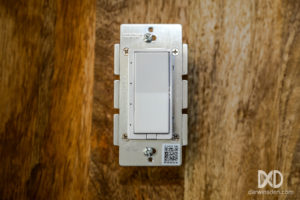 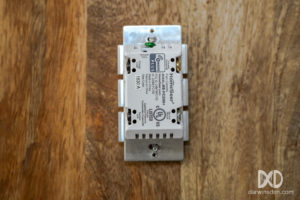 Which controller/hubs and devices may be best for your specific system needs?

The Best of the Z-Wave Door and Window Sensors

Updated for 2018 Originally Published: 3 February 2016 Door and window sensors rank perhaps right up there with security cameras when most us think about critical features of home security systems. These sensors let your home automation controller know when a door or window is open or closed in order to trigger corresponding alerts, alarms. […]