This is a review of the Aeon Labs Aeotec ZW056 Z-Wave Plus Gen5 Doorbell. I received an initial production release of this new device back in November and wanted to get this initial review out there to provide an overview of my early findings and also as a forum for discussion and resolution of any issues others may be having. I have been chronicling my adventures with this device now for several months in the following post.

In my earlier must-have home automation devices post, I suggested that a smart doorbell is a must-have device for the home automation enthusiast. In this day and age, it seems to be becoming more popular for homeowners to add increased security to their home, like through a smart doorbell so they are able to keep a better eye on what is going on in their property. And if a smart doorbell is not your first choice, then you may want to have a look through these top rated video doorbells 2020 to see if you can find an alternative one that best matches your needs. Whichever product you decide on, it is important that it is one that benefits you. Until Aeon Labs released this product, my recommended option was a roll your own DIY assembly using a dry contact bridge and relay. I considered some of the more complex and expensive doorbells out there such as SkyBell, Ring, and Doorbot that include cameras and intercom systems, but frankly, I really do not care for how bulky and obtrusive these devices are, and I do not want to pay a monthly subscription fee for any of the features. I was looking for a clean and welcoming simple door bell. I would rather have a discrete security camera in the corner of the entryway than a camera-equipped doorbell.

For those that are more interested in the Z-Wave speaker capabilities of this device, I will jump to the spoiler alert here and say that although the doorbell function may not serve the needs of everyone, I did find the customizable MP3 capabilities of the Z-Wave speaker to be a unique and valuable addition to my home automation set-up. I’ve configured the Aeotec Z-Wave speaker to play various synthesized speech audio clips based on events that can occur in my home automation set-up, such as “water heater leak detected”, “front door is open”, and my favorite: “Diamondbacks game is starting”.

Doorbell functions aside, you can read more on the Z-Wave speaker capabilities of this device in the Audio Clips for Smart Home System Notifications post.

The Aeon Labs Aeotec ZW056-A Z-Wave Plus Doorbell arrived in an unassuming white box with black lettering, similar to other Aeon Labs products I have received from online vendors. 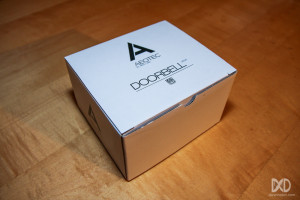 Only the Aeotec speaker is a Z-wave device. When paired, this device shows up as a simple Siren by default on the SmartThings Hub and the Almond+. From what I can find online, on the Vera, this will show up as a simple on/off switch by default. Details on how to integrate the Aeotec Z-Wave speaker with Vera Controllers can be found at airedalez.net. For the SmartThings Hub, Kevin LaFramboise has provided a thoughtfully developed Aeotec Doorbell device handler. Triggering these MP3 clips to play based on SmartThings device events can be easily accomplished using Adrian Caramaliu‘s excellent CoRE (Community’s own Rule Engine) SmartApp, by entering in the corresponding track number you would like to play for the “Play Track” command available for “Siren” devices.

The Amazon product description states that this device also works with HomeSeer and the Universal Devices ISY994Zw. In future updates, I will do my best to document device compatibility with all of the controllers listed in the Home Automation Controller Feature Comparison Table. Please drop me a note and let me know of your successes or failures pairing this device with other controllers. 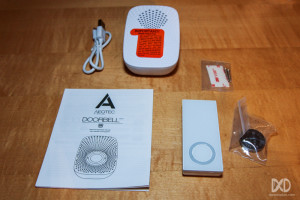 The actual doorbell button or “Doorbell Sensor” as it’s labeled, is not Z-Wave enabled but is a wireless 433.92 MHz device that only communicates directly with the siren. The size of the doorbell button housing itself is a fairly unobtrusive 3.25″ x 1.875″ x 0.5″.

The doorbell may be operated independently, without a Z-Wave controller for a simple trigger of the speaker’s MP3 audio clip when the doorbell button is pressed, but unless you want to – or already have opened up Pandora’s box by owning a Home Automation Controller, there are certainly less expensive wireless doorbell options out there. By default, the siren plays a simple doorbell chime.

Out of the box, the 433 MHz doorbell button was not correctly paired with the included speaker and did not trigger the MP3 audio when pressed. To add to this oversight, the pairing process was not described in the manual that was provided with my unit. Aeon Labs has since added the note below to their newer manuals and pairing the doorbell with the siren per these instructions resolved the issue for me:

NOTE: If for some reason the wireless button does not seem to communicate with the speaker or you need to exchange one of the parts, you may have to pair the components. To perform the pairing process, please press the Volume – and Volume + buttons at the same time – the LED indicator on the speaker will start flashing rapidly. Press the wireless button once to complete pairing

Note: When the Doorbell enters into pairing mode, it has a 8 seconds timeout for pairing, so you need to press the new Wireless Button once within the 8 seconds pairing timeout. 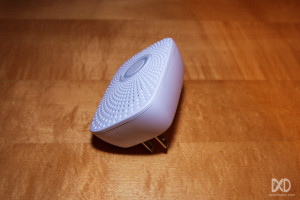 An updated user manual and developer specifications, including command classes, trigger functions can be found on Z-WaveAlliance.org here. I have also placed a copy on DarwinsDen.com here.

For some reason, according to the device documentation, the doorbell is not configured by default to send notifications when the state of the doorbell is changed. To ensure that your Z-Wave controller is notified when the doorbell button is pressed, change parameter number 80 (1 byte) from 0 (nothing) to 1 (hail CC) or 2 (basic CC report). Setting parameter 80 to 1 worked for my setup. If you use the SmartThings device handler mentioned above, it will take care of setting these parameters automatically for you.

As with all compliant non-battery-powered Z-Wave devices, the speaker unit will act as a repeater node on your Z-Wave mesh network. 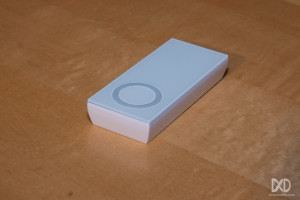 I’ve had good success with other Aeon Labs Aeotec products, and functionally it looks like this product may work well for many. Although the face of the doorbell button is thin glass, I am a little disappointed with the plastic look and feel of the complete button assembly housing. Aesthetics-wise, I am not sure I’ll want to use this as the doorbell on our front entryway (or if my wife will allow it to be placed there). I may investigate if the button assembly can be disassembled and adapted to work with my current doorbell button. Regardless, the speaker appears very usable as a standalone Z-Wave siren.

I have seen reports that holding the doorbell button housing while pressing the button may significantly adversely affect its range. In my early testing, the doorbell button does appear to be finicky about its location and orientation. To properly evaluate operation at the intended location before installing the button, you may need to temporarily tack the button in place before testing. 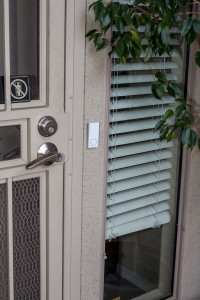 In general, the Aeon Labs Z-Wave doorbell functioned acceptably for me. Since testing this, I have heard several complaints regarding the range of the 433 MHz doorbell button, but I did not experience any issues when I set up the speaker in a room about 20 feet from the button.

I found the volume of the speaker to be more than adequate. I ended up turning the speaker down about to about half for my testing. Sound quality was acceptable to me for a doorbell or siren.

In the end, I did not leave the doorbell button installed as part of my system for the following reasons: 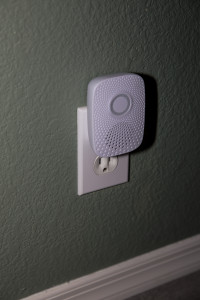 I’m glad that the lowly doorbell is finally receiving the attention it deserves in the home automation arena, but I do wish Aeon Labs would have put a little more into the button device on this product. I certainly would have paid more for a solid metal housing – ideally with standard brushed nickel or bronze metal finishes. The option to hard-wire the button into existing doorbell wiring for signaling a standard chime and to provide a permanent power source would also be a welcomed enhancement. Ring provides both of these features, but for me, the video and intercom capabilities – and associated price tag and package bulk of the Ring keep it from being an option.

I did disassemble the button assembly by prying off the front glass plate with an X-Acto knife. Unfortunately, the button uses a micro switch soldered onto a circuit board, with no conventional leads. Although it may be possible to adapt this to a standard doorbell switch, it wouldn’t be a trivial task. A dry contact bridge and a relay is a much easier way of implementing a DIY smart doorbell mechanism.

More Than a Doorbell

Even without the doorbell button, the ZW056 Speaker is a very functional Z-Wave speaker/siren with customizable MP3 audio clips, and will remain as a part of my system to play audio alerts with detailed status on door and window alarms, and water leaks. I’ve posted sample recordings of these audio clips here as well as a few tips on getting them to work, in hopes that it may save someone a little time recording their own customized MP3 clips for the speaker. The button itself may be re-purposed as well to control a door lock, light switch, spa pump, garage door opener, or as a panic alert trigger – as long as it is kept within an acceptable range of the speaker.

I recently received a Nexia DB100Z Z-Wave Doorbell Sensor and at $45 it looks to be an acceptable price for a convenient all-in-one package. For an initial review and details on the SmartThings device handler for this device, see the DarwinsDen.com Nexia DB100Z Doorbell Sensor Review.

I’ve also now have tested a SAGE Zigbee doorbell sensor with the SmartThings Hub and have been extremely happy with it. The main difference between the SAGE and Nexia, aside from the Z-Wave and Zigbee interfaces, is that the SAGE sensor also supports distinct notifications from a second doorbell for those that have two doorbell buttons connected to the same chime assembly. For an initial review and details on the SmartThings device handler for the SAGE device, see the DarwinsDen.com SAGE Zigbee Doorbell Sensor Review.