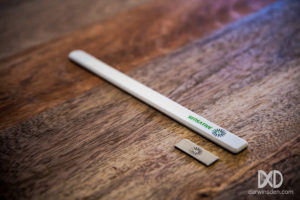 At roughly the size of a nail file, the Strips door and window sensor is an innovative 3mm thin Z-Wave Plus sensor developed by a small team at Sensative, a start-up out of Lund, Sweden. I have been watching the progress of the sensor on Indiegogo for a while now and have been more or less patiently waiting for a US Z-Wave frequency compatible version to be released. 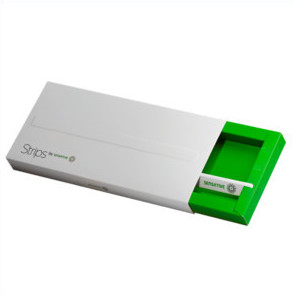 Door and window sensors rank perhaps right up there with security cameras when most us think about critical features of home security systems. Aside from the obvious security benefits for intrusion detection, connected door and window sensors can also allow you to quickly verify that all of your exterior fiberglass doors and windows are closed regardless of where in the world you may happen to be at the time.

The thin profile of the Strips sensor is due primarily to its custom battery technology, a very thin Z-Wave+ radio module, and an anisotropic magnetoresistive sensor instead of a traditional bulkier reed switch. Unlike most every other sensor to-date that is designed to install on the outside of the door or window frame, Strips can fit in between the door or window and frame and even between window covers like Plantation Shutters and other various treatment options – or pretty much in any gap in an open/close mechanism as long as there is a minimum of around 3 mm clearance. So if you are in the market for replacement windows to upgrade the look and feel of your home, you may want to make it known to your window installation company such as replacement windows Colorado, for example, that space of around 3mm is to be left for your sensors to be installed alongside.

According to Sensative, the magnet should not be placed on metal, and to ensure adequate signal propagation, the sensor should not be mounted directly on metal surfaces or within a metal structure.

The Strips sensor has an advertised battery life of “up to” 10 years and a range of up to 40 meters. Sensative states that the device is suitable for both indoor and outdoor use.

Sensative has just completed FCC certification of the Strips sensor, but has not yet confirmed a US launch date or planned product pricing for the US market.

Update 23-September-2016: Strips is now available in the US and can be purchased at Amazon.com or directly from the Smartest House.

I typically test products and services that have been purchased through standard retail channels. There are many reasons for this; Aside from the concern of the perception of bias from the receipt of products for review, ideally this also provides some indication of sample variation versus items hand-picked by vendors. Since a production version of the Strips sensor using the US Z-Wave frequency is not currently available, this review is based on a prototype US frequency version provided to me directly from Sensative. Although I wouldn’t expect to see major changes in the final production version, there is no guarantee that the product I am reviewing here is representative of exactly what will ship in the US market once this version reaches production. As soon as this product is available for sale in the US, I will obtain one from standard retail channels and will note here if there are any production version differences.

Update 27-September-2016: I have received a production version of the Strips sensor obtained through standard retail channels, and aside from a small production difference in the backing on the back side of the sensor, it appears to be nearly identical to the prototype. As with the prototype version, the sensor paired easily with the SmartThings Hub and so far has worked without a hitch to relay the open-close status after several test triggers. I will be installing it and putting it to a full test shortly. 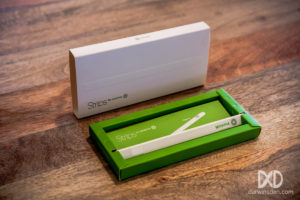 Knowing this was going to be a pre-production prototype of the US version of this device, I wasn’t exactly sure what to expect as far as packaging, but my Strips sensor arrived in a ready-for- the-display-shelf box, complete with high-quality multi-language device instructions befitting any major electronics manufacturer.

Pairing with a Z-Wave Hub Controller

Strips requires a Z-Wave capable controller, and there are quite a few of these controlling hubs on the market from which to choose. Several of the best controllers can be purchased for under $100. Choosing the right hub can be a very personal choice, and with the current products available, you must balance price, flexibility with speed, security and reliability. My top pick, the Samsung SmartThings Hub does not have costly subscription fees or expensive extras. Once you have the hub, additional less intelligent (and therefore less expensive) peripheral devices such as smart smoke alarms, water leak detectors, and switches, energy monitoring devices can be added over time. 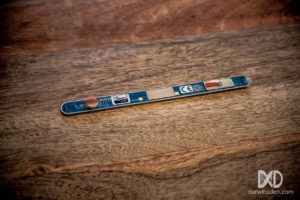 Strips sensor back as packaged with the contact trigger magnet and pairing/maintenance magnet attached.

I performed a simple range test, bringing the sensor across the house and several rooms away, approximately 100 feet from the controlling hub and experienced no noticeable range effects. Since the sensor’s batteries are self-contained, there was no way for me to test the accuracy of the reported battery status, and the SmartThings Hub showed 100% battery during my testing. Although I paired the sensor several times with a HomeSeer controller, I did not leave the sensor connected for an adequate period to receive battery status, but will update this post when I have more information on battery level reporting with HomeSeer.

After the initial controller auto-mode pairing, follow-on device exclusion and pairing was a fairly simple process requiring the included round maintenance or ‘B’ magnet is brought up to the round edge of the sensor 3 times within 10 seconds. Assuming you can find the magnet when you need it, this is actually a simpler process for me than removing the covers of most conventional door/window sensors to get to their include button.

Installation and Hands on with the Strips sensor 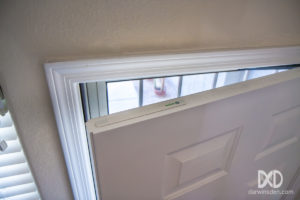 The installed Strips door/window sensor is not visible at eye level.

All of the window frames in my home are extruded metal, and so I was unable to use Strips on any of my windows or my patio sliding door. Fortunately, all of the standard doors in my house had sufficient gap to place the strips sensor. 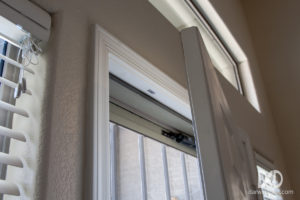 To better allow monitoring of the sensor operation, I configured the SmartThings Hub to send a “front door is open” voice alert using the Aeon Labs Aeotec Z-Wave speaker/doorbell each time the Strip sensor status changed to open. The sensor performed flawlessly for me over a several day test period.

I also tested Strips on a kitchen drawer and my refrigerator door (which has inexplicably developed an issue closing on its own), and it worked well in both locations. The sensor had no issue propagating the signal through the metal refrigerator exterior.

Based on my testing, the backing on the sensor and magnet appeared to maintain its adhesive after initial placement and it may be safe to relocate the sensor once or possibly twice after initial placement. Finally, though, after installing and removing at several test locations, the adhesive became weak. Although this would not be typical for most users, if you end up moving the sensor more than a couple of times, you may need to re-apply a silicone, rubber, or other adhesive suitable for your environment. 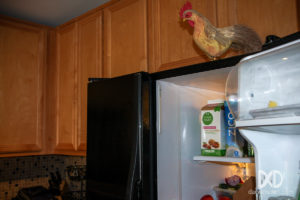 The Strips door/window sensor worked well mounted in the refrigerator, despite the metal exterior. 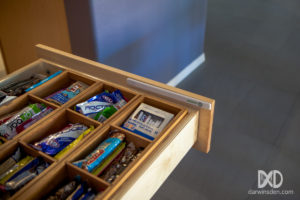 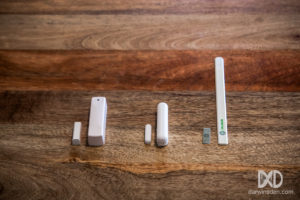 Door and window sensors are typically one of the most visible components of a home automation and security system ? and their aesthetics are an important consideration for many. While there are quite a few Z-Wave and Zigbee door and window sensors on the market to choose from (see the DarwinsDen.com Best of the Z-Wave Door and Window Sensors review), I have in the past recommended and personally preferred to use more discreet and unfortunately expensive sensors such as the Fibaro Modern Miniature Z-Wave Door/Window Sensor.

When aesthetics are high priority for high visibility doors, the ZW089-A Z-Wave recessed door sensor previously garnered my top, albeit somewhat reserved recommendation. Due to the shape of the door frame molding on my interior and exterior doors, the only previous straightforward option for my doors prior to Strips was to use these Aeon Labs recessed door sensors, although I personally do cringe a little at the idea of drilling into my door frame to install these. 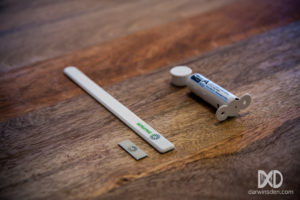 My personal preference now would be to use Strips sensors instead of other door and window sensors for installations where these sensors can be appropriately installed and where aesthetics is of prime concern. For my purposes and door configuration, the Strips sensor is a superior alternative due to the much simpler and non-destructive installation process. 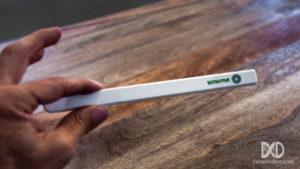 I was extremely impressed with the production quality, instructions and packaging, and most importantly, with the installation and operation of the Strips sensor. Strips appears to be thoughtfully designed and very well engineered. I will likely be recommending this device for the US market as soon as a production version is released with US Z-Wave frequency support.

My only nagging but mild concern about the Strips sensor is that despite having a 10-year advertised battery life, its battery is not rechargeable or replaceable. I do recognize the design concessions required for such a device and believe the sacrifice is well worth it if you also consider that the lack of removable components also aids in device weatherproofing in support of outdoor operation.

Overall, the disposable nature of the device is not a major concern for me since the sensor is quite easy to replace, and your guess is as good as mine as far as what will happen in 10 years; A similar or newer technology replacement unit will likely be available and relatively inexpensive by the time this reaches its advertised battery life.

Sensative does recommend modifying the Z-Wave configuration for the device to have it only send battery reports once every 24 hours in order to prolong battery life, but I have not been able to find information on which configuration parameters the sensor requires for this. I will be following up with Sensative and will report back.

With the release of Strips, Sensative has introduced a strong competitor for the Z-Wave door and window sensor market. For those in Europe and hopefully soon for those in the US, I encourage you to look at Strips – at least for areas where aesthetics are of concern. I plan on adding additional Strips sensors to my systems as soon as production versions are available for the US market.